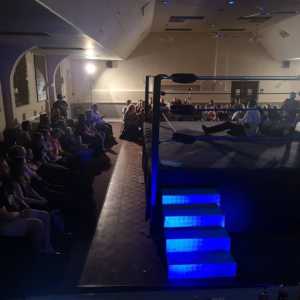 Match 1: Priscilla Queen of the Ring Vs Hitman for Hire
Winner: Hitman for Hire (21:16)
Your opening contest was a quick paced, fast action match featuring Drag superstar Priscilla Vs KAPOWS assassin, a sure fire match of the night contender, the action was back and fourth, Priscilla used all the ‘slap’s’ she could but was no match for the Hitman, who picked up the win with his devasting Yakuza kick for the three count.

Match 2: Kris Kay Vs Sean Kirkpatrick
Winner: Kris Kay (12:52)
The Irish brawler wanted to make an impression in this match up against the Classic one, but the ever favourite with the fans Kris Kay managed to beat Kirkpatrick in a swift contest. After the macth Cobalt came to the ring and chokeslammed Kris for reasons unknown.

Match 3: Karl Atlas Vs Steve Luthor
Winner: Steve Luthor (17:30)
Steve Luthor addressed the Kapow fans & called What Culture star out for his ‘non appearance’ claiming he was to scared to take on the British Bruisers.
The Returning Karl Atlas took on the former Kapow GM in an epic battle of smarts Vs strength, these two former rivals laid it out all in the ring, but with outside interference from the British Bruisers, Luthor picked up the win after hitting Atlas where it Hurts (Low blow) while referee Billy Madison was distracted.

Match 4: British Bruisers Vs Mjr Lee Buff & The Mighty Oak
Winners: The British Bruisers (16:42)
*Match Change*
With Simon Miller unavailable, The Mighty Oak, James Kenna stepped up to take on the Bruisers in this Non Title Match up (Tag Championship Match to be Rescheduled) Buff & Oak had this match up won in the early stages but with some questionable tactics by the British Bruisers they managed to secure the win with there double team move. (Suplex, Powerbomb).

Match 5: Rishi Ghosh Vs Lion Kid
Winner: Lion Kid (19:23)
These two veterans of the Wrestling Business went toe to toe in this awesome match with well over 30 years experience in the industry it was sure to be a great match, The Prince of Mumbai’ was accompanied to ring by ‘The Monster’ Cobalt, Lion Kid fought hard using his pace, speed & agility, Rishi overcame this and looked dominant during parts of the match up, but the ever impressive King of the Jungle went home with the WIN! Cobalt who was ringside had enough and destroyed the Lion Kid & our own cameraman! what a monster!

Match 6: Maddog (C) Vs Joe Strange
Winner: Maddog (17:45)
In our Main Event of our sold out return to Portsmouth your Heroweight Champion The Mighty Maddog Quinn took on the young and up and comer Livewire Joe Strange, Joe yand speed, however Maddog soon lost his rag and turned on the ‘aeriel expert’ and put down his quickness with strength and size. After a huge gunslinger lariat which put Ant La Dash out of action back in August, Maddog Quinn picked up the victory and remains your Champion.
Aftermath: With Maddog celebrating his win, The Monster Cobalts music hit one last time, chokeslamming Joe Strange, Maddog tried to rescue but was also attacked by Cobalt, thankfully Kris Kay & Lion Kid stormed the ring to save the day and get rid of THE MONSTER for good.
Next event at Stamshaw, Portsmouth – March 2020.
Thank you Portsmouth! #wearekapow

About the Author: Ant Lacayo